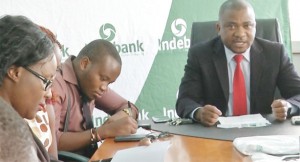 Two lucky businessmen have won the grand prizes in Indebank’s Phwamwamwa promotion following a final draw that was held in Blantyre on Wednesday.

A Blantyre based business man Joshua Hadji is now a millionaire after winning the K2 million grand prize while a Salima-based businessman, Clement Phiri, has won a maize mill.

The promotion run for three months with an overall objective of inculcating a savings culture among Malawians.

He said through the promotion, the bank managed to reach out to some of the unbanked population in Malawi.

“As Indebank, we are not just interested in giving out loans or getting money from people but we want to transform people’s lives through the services that we give,” he said.

During the ceremony, Indebank also gave out an iPhone smartphone and other consolation prizes during a monthly draw of the promotion which coincided with the final draw.