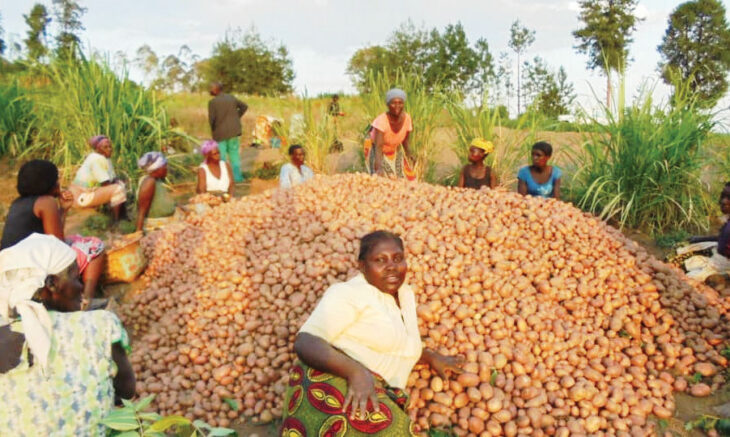 PROGRESSIVE—Farmers glory in the new varieties

There newly released varieties of potato are expected to respond to needs of stakeholders of the potato value chain, including high yielding per unit area, early maturing and tolerance to major pests and diseases amid growing changes in climatic conditions.

The Department of Agricultural Research Services (Dars) in the Ministry of Agriculture in collaboration with the International Potato Centre (CIP) announced Tuesday that the agricultural technology clearing committee had approved the new varieties for production and utilisation in Malawi.

The new varieties, Mpatsa, Mtukulapakhomo, Ufulu and Kaso, have been produced under the five-year Root and Tuber Crops for Agricultural Transformation in Malawi (RTC Action) Project funded by Irish Aid.

A statement released by Dars and IPC says the two institutions are committed to developing high yielding varieties that are tolerant to late blight diseases for increased productivity.

According to the statement, the goal of the project is to strengthen the contribution of roots and tubers to a diversified, productive and resilient agricultural sector that provides food security, nutrition, incomes and employment in Malawi.

“An early maturing variety (90 to 110 days after planting), Mpatsa has the potential to yield 36 tonnes per hectare. It does well in most potato producing districts of Malawi. The tubers are oblong and cream coloured,” the statement says.

“Kaso has the potential to produce 30 tonnes per hectare under farmers’ conditions. It is also an early maturing variety (90 to 110 days after planting), with a moderate dormancy period of 60 days,” Dars and CIP say.

They add that the gross margin analysis of potato has demonstrated a positive trend over the years with the average having risen from K1.2 million to K1.7 million and less than K1 million to K1.1 million for seed and table potato, respectively.

“This positive trend demonstrates the potential of the crop as an income generation venture for the producers, thereby helping to improve the economic status of the farmers,” the statement says.