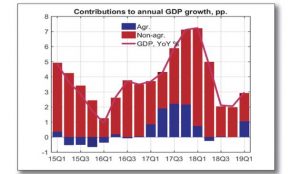 Main driver of Malawi economy, agriculture, is expected to rebound to 3.9 percent this year, up from 0.9 percent in 2019, the second Monetary Policy Report for 2019 has shown.

The estimate is slightly higher than the 2 percent growth projection the Reserve Bank of Malawi (RBM) made at the end of the first Monetary Policy Committee meeting in January.

The rebound in agriculture, coupled with stability in electricity supply, is said propel the economy to 5 percent up from the anticipated four percent in 2018.

“This prospective outcome arises from better rains across the country, despite severe floods which have affected selected areas,” says RBM in the Monetary Policy Report issued on Monday.

Overall, output gap is on a recovery path at the beginning of 2019, because of improvements in both agriculture and non-agriculture output gaps.

The recovery in non-agriculture output gap is explained by improved electricity supply and easing monetary conditions during recent quarters.

Malawi’s economy has remained agro-based. That is to say, the strength of the economy depends on the vibrancy of the agriculture sector.

Performance of the agriculture sector is likely to help ease inflationary pressure.

Inflationary pressures remained broadly subdued in the first quarter (Q1) of 2019. Inflation decelerated to 8.7 percent from 9.9 percent in the fourth quarter of 2018, largely attributed to developments in non-food inflation.

At 8.7 percent, the 2019 Q1 inflation outturn is 0.6 percentage points lower than 9.3 percent RBM projection reported during the first 2019 MPC meeting.

“The drop in non-food inflation was largely attributed to stability in the exchange rate as well as lagged effects of the 7.7 percent and 3.8 percent reduction on fuel pump prices in December 2018 and January 2019, respectively,” reads the report.