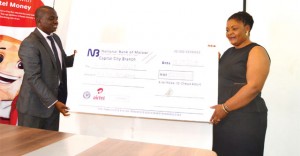 Airtel Malawi has splashed out over K10 million in the on-going Tisanje Promotion barely three weeks after  launching the promotion.

Speaking to journalists during the third draw at the company’s premises in Lilongwe on Tuesday, Airtel Money marketing manager, Masiye Mazaza, said the promotion has received an overwhelming response.

He said the number of people participating in the promotion keeps growing and urges customers to enter the promotion increase their chances of winning.

“The more the entries, the higher the chances of winning,” said Mazaza.

He said the promotion is also helping to grows Airtel’s bond with customer base as it is attracted new subscribers on the network.

One of the winners, Pilirani Nthanga – who owns a restaurant in Lilongwe, hailed Airtel for the promotion, will help improve many people’s lives financially. Apart from the 30 weekly winners of K50, 000, the ultimate three winners in the promotion will each pocket a whooping K5 million.