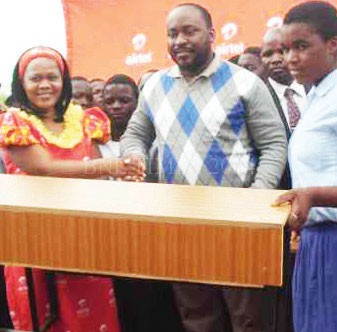 Inkosi ya Makhosi M’mbelwa V has commended Airtel Malawi for the good charity work it is doing in the district and other parts of the country.

Mbelwa made the remarks in Mzimba where he was guest of honour at a ceremony where Airtel Malawi donated 85 desks valued at K2.2 million to students of Edingeni in Mzimba.

“We appreciate your charity work and these desks will go a long way in improving standards of education at this school,” said Mbelwa.

He then deplored the tendency of some parents’ who, he said, force girls into early marriages.

Mzimba District Education Manager Leman Mvula thanked Airtel Malawi for the donation saying the Ministry of Education alone could not have managed to provide teaching and learning equipment as it has other priorities.

The school’s Head girl Gloria Chiwali said the donation will motivate them to go to university.