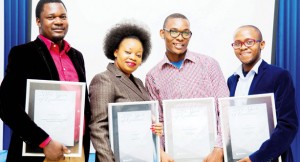 Standard Bank Malawi has sent four of its outstanding employees on a luxury boat cruise from Barcelona in Spain to Rome in Italy as a token of appreciation for their excellent performance in 2014.

The four are Dora Mangulama, Ben Chakachadza, Bamusi Mapfupa and Charles Namanja Jnr. They excelled in their respective areas of expertise of customer service and sales under personal and business banking.

She said the four Malawians have joined 120 other winners from Standard Bank group operations in Africa aboard the ‘Allure of the Seas’.

“As an employer of choice Standard Bank recognises excellent individual efforts that contribute to the overall success of the bank’s business,” said Kubwalo- Chaika.

“We have set the bar very high and for anyone to win the Excellence Awards which uses a group rating matrix [to prove] that they’re indeed outstanding in the business,” said Kubwalo-Chaika.

She said the four employees have become models of excellence to other employees in the bank and that it is the hope of the bank that the award will inspire them to scale even greater career heights within the bank.

Previous outstanding performers travelled to Cape Town, South Africa where they visited the Table Mountain and other places of attraction around the cape.