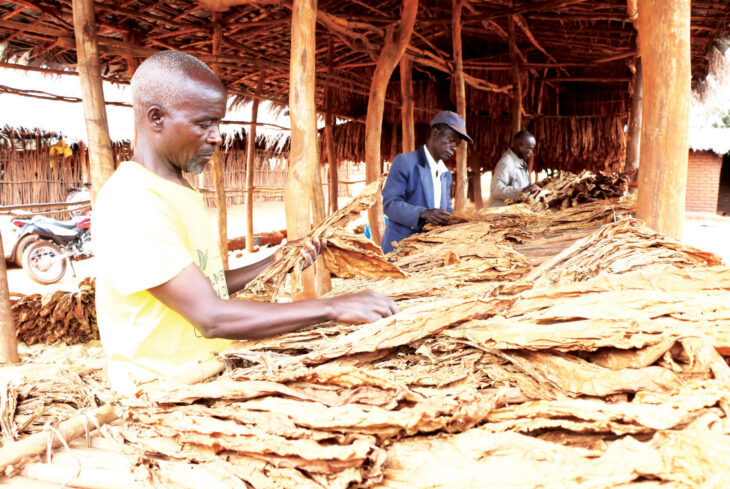 The tobacco market is in season bringing hope that, finally, the much needed foreign exchange will start trickling in the country’s kitty.

It is that time of the year when tobacco farmers earn from their toil and almost all other sectors of the economy start to tick.

Tobacco is what drives Malawi’s economy, but cries of high rejection rate and low prices characterise almost all seasons, prompting questions why, with all our vast experience in tobacco business, we still have incidences of rejection of the leaf at the auction floors based on poor handling of the commodity by farmers.

As much as 50 percent of bales presented for sale at Limbe Auction Floors were rejected a week into the selling season.

The reasons for the rejections were that farmers brought in leaves which were wet and in some instances moldy.

While opening the Mzuzu Auction Floors, Minister of Agriculture Lobin Lowe wondered why farmers who receive extension services and training from buyers and government alike could send for sale mixed grades in one bale or wet tobacco.

According to Lowe, vendors were still finding their way into the market and that they were the ones messing up the market, despite the law barring them.

The sentiments by Lowe were also echoed by a group of farmers from Phiri la Njuzi in Lilongwe’s Traditional Authority Masula area.

Speaking in an interview Limbani Kaitoni, leader for Kapululuka Zone and growing tobacco on contract with JTI, concurred with the minister that the market might still have pockets of vendors who still find their way to the floors and are the ones bringing chaos to the market.

“I don’t believe that up until now there are farmers who can send to the floors wet and moldy tobacco or bales with mixed grades. It just doesn’t make sense because we receive intensive training and advice all through the production cycle,” said Kaitoni.

Irked by the development, some farmers have taken it upon themselves to ensure that no intermediary buyers or vendors are allowed to buy tobacco in order to bring sanity to the market that oils the country’s economy.

Kaitoni, who comes from east of the capital, Lilongwe said tobacco farmers in his area formed a committee whose roles are to ensure that no vendor is allowed to buy tobacco from farmers in their area.

He said the committees came up with written by-laws meant to protect farmers’ interests as well as to ensure that tobacco is protected from vendors. Through the by-laws, the zone leaders are empowered to confiscate the leaf and weighing scales whenever they find one buying tobacco from farmers illegally.

To render credence to the exercise, Kaitoni said they enlisted chiefs into the committees who play a significant role of ensuring that the by-laws are followed to the letter and punishment meted accordingly to those found on the wrong side of the law.

Biliat Kadzibwa, another contracted grower, feels farmers too have an important role to play in the industry to ensure that there is sanity in the market.

“Why should we allow non-farmers invade our industry then? We are joining government, Tobacco Commission and the buyers in protecting the crop as well as ensuring quality control,” Kadzibwa said.

Kefa Maliki is a farmer, from Lilongwe East and has been growing tobacco under contract for the past 10 years.

Maliki said protecting the leaf from vendors should be the duty of every tobacco farmer and not government or Tobacco Commission only.

“Since we started these committees, we don’t have issues of rejection of leaves from this area. In fact we are among growers who are known for producing top quality leaf. But not only that, we don’t experience tobacco thefts around this community because literally there is nowhere to sell it other than the auction floors,” Maliki said.

Formation of committees that help bar vendors from taking part in tobacco selling might not end all problems the industry has, but at least it is the starting point to having a smooth-run market that benefits all – farmers, buyers and government as whole.