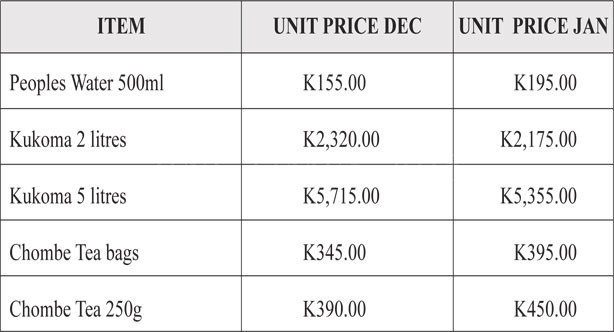 The Consumers Association of Malawi (Cama) has released a report of a survey it conducted between November 2014 and January 2015 which shows that prices of goods on the local market have generally not changed over the period.

This is despite the significant and consistent appreciation of the Malawi kwacha since mid December last year and the reduction of fuel prices twice over the same period.

Cama executive director, John Kapito, said the association has since written Minister of Industry and Trade Joseph Mwanamvekha to operationalise the Consumers Protection Act through which a body has to be set up to monitor commodity prices.

“This body is key in ensuring that companies do just justify their prices in a liberalised economy where we still have many inefficiencies and huge monopolies,” said Kapito.

The Cama Inflation Basket actually shows that prices of some commodities have gone up during the period.

During the survey, Cama says it was also shocked to notice that the exchange rates have not moved downwards as much as there are huge differences between the selling and buying of foreign currency where some banks are buying the dollar at K435 and selling the same at K 495.

“And this has a huge play in the way prices are factored in Malawi. We are still closely monitoring this,” reads the Cama report.