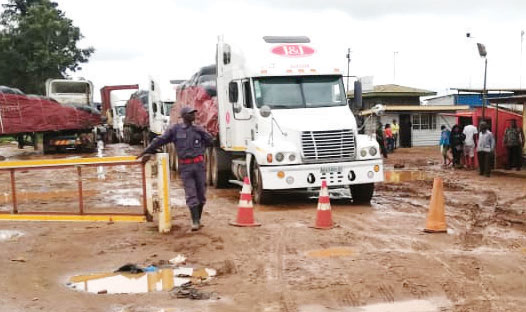 Expectations are high that movement of people and cargo between Malawi and Mozambique through Dedza border post will be smooth and time taken to cross the border reduced, once a project to establish a one stop border post is completed.

This follows revelations that the project will commence in May this year. The project has stalled for five years after its launch in September 2014 as part of improving the border post infrastructure programme.

It also follows Minister of Trade, Industry and Tourism, Salim Bagus and Minister of Transport and Public Works Ralph Jooma’s visit to the border post Monday.

They two ministers acknowledged that currently people and transporters spend a lot of time to process documents on both sides of the border coupled with poor infrastructure which is inconveniencing.

Bagus said the project will involve construction of infrastructures for inspection of big buses and trucks.

“During rainy season, the place is very pathetic hence government’s commitment to make sure that the post is of a good standard.

“Already the Malawi Revenue Authority (MRA) is trying to put temporary measures to mitigate the situation before the project commence,” Bagus said.

Jooma added the border post is a hub of economic activity for Dedza and a link between Malawi and Mozambique and South Africa hence the need to have a modern boarder post.

“The yet to be constructed post will among other things have shade for bus inspection, shade for cargo Inspection and space for truck parking beside construction of the road connecting to M1 road.

“The project has been taken some time to commence because there were discussions with our Mozambican counterparts regarding the facility which we have now resolved,” Jooma said.

He however was quick to urge the government to make good of the promise to have the project commence this year and completed in due course.

The K1.8 billion project was granted to a Chinese construction company, China Jiangxi International. It indicted at the that they were not funded to commence the project.