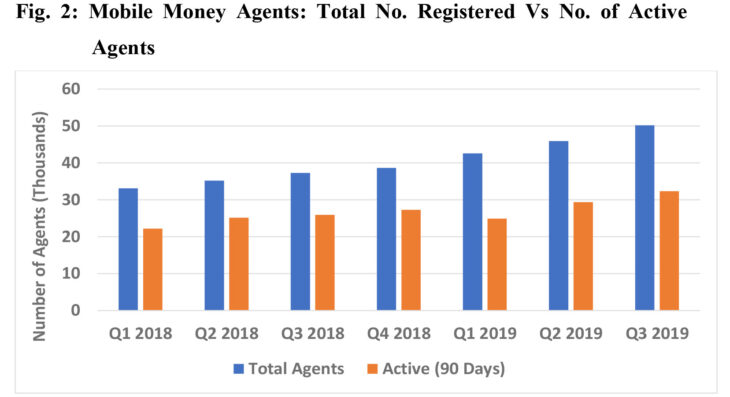 Subscriber base for non-bank mobile money services grew marginally in the third quarter of 2019 by 1.3 percent to a total of 7.1 million subscribers, Reserve Bank of Malawi (RBM) figures show.

In its third-quarter National Payment Systems report issued yesterday, RBM says there was a rebound in the activity rate, rising to 49.2 percent as of end of September 2019 from 37.4 percent in June 2019.

This is signifying that more mobile money subscribers used the service during the 90-day period under review, compared to the preceding period.

RBM says although this is encouraging, more collaborative efforts by stakeholders are required to ensure the remaining 50.8 percent of mobile money subscribers become active users of the service.

The report also shows that the period July to September 2019 has seen transactions processed from both wholesale and retail payment streams increased to 81.2 million.

This represents an increase of 10.2 percent when compared to the 73.6 million transactions recorded in the preceding quarter.

The development has been attributed to a drop in value of the Malawi Interbank Transfer and Settlement System (Mitass) transactions.

Retail and digital financial services transactions increased by 10.3 percent to 79.6 million whereas the corresponding value increased by 25.2 percent to K1,337.8 billion during the period.

“The trend in both volume and value of transactions showed significant improvement from the second quarter of 2019, with notable challenges being low activity rates for mobile money subscribers and sparse coverage of access points especially in remote areas,” reads the report in part.

Economics Professor at Chancellor College, Ben Kalua, said the decrease in the value transacted does not raise an alarm, saying it reflects performance of the economy.

RBM has since committed to continue strengthening policy and regulatory environment and collaborating with others to design and implement measures that will promote both uptake and usage of digital financial services in the country.