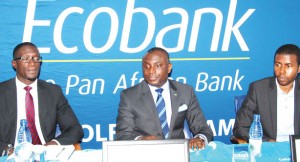 Briefing reporters in Blantyre on Friday, Ecobank Malawi managing director, Charles Asiedu, said the bank is proud of the achievements and its contribution to the economic development of Malawi.

“These awards are an encouragement to us as a bank that our efforts are indeed adding value,” said Asiedu.

He said the awards have come at a time when Ecobank Malawi is increasing its efforts to grow into one of the largest banks on the local market.

The African Banker Awards Magazine complimented Ecobank Malawi for the role it played in fuel importation through issuing of letters of credit amounting to US$60 million to Petroleum Importers Limited (PIL) in the year 2013/2014.

This, according to Asiedu, led to a higher return to its shareholders as the return on average equity improved to 34 percent from 26 percent in 2013.