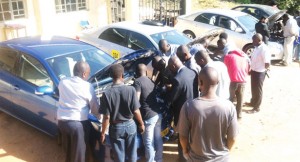 The country’s main producers for ethanol, Ethco Limited and Press Cane, believe that it would be viable for the pump price of ethanol to be 20 percent lower than that of petrol once usage of ethanol as fuel for vehicle rolls out full scale in the country.

This was revealed on Tuesday at Soche Technical College in Blantyre during the launch of the first bunch of vehicles which have been converted to start running on ethanol.

PCL general manager responsible for operations Christopher Guta said currently, talks are underway among stakeholders and the Malawi Energy Regulatory Authority (Mera) on how to channel the commodity into the market on full scale.

He said all factors considered, prices for the commodity could be 20 percent lower than that of petrol.

“Demand for ethanol is likely to increase after a successful conversion of the first bunch of the petrol-driven cars to use both ethanol and petrol,” said Guta.

He said Malawi is currently able to produce a maximum of 36 million liters of ethanol, some of which is in the production of other commodities on the market.

Of this, only 20 million liters is used in the blending with petrol on the market.

On the other side, the available demand for petrol is around 110 million liter per annum. And the commodity is trading at K 723.60 per liter.

The converted vehicles have been fitted with kits that allow the vehicles to be flexible on what fuel it can use, either petrol or 100 percent ethanol.

“There will be a need to increase the supply of ethanol on the market,” said Guta.

The Malawi government is promoting imported ethanol-fuelled cars to wean the country off its fossil fuel dependency and better harness the country’s ethanol industry.

This is part of Malawi’s ongoing drive to find alternative and cheap sources of fuel to replace imported fossil fuels.