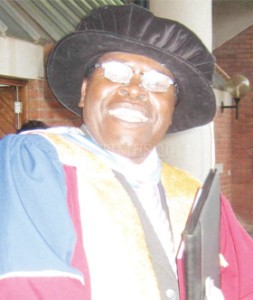 This is contained in a paper titled ‘People Management and National Development in Malawi: Challenges and Opportunities’ by University of Malawi’s newly-elevated professor of public administration, Lewis Dzimbiri.

Dzimbiri warns that people management challenges could affect implementation of national development plans, observing that the country has been registering more cases of industrial action since 1992.

He indicates that, between 1992 and 1999, the country registered 300 official strikes involving 800, 000 workers which translated into one million days of productive work lost.

He suggested that in collaboration with the University of Malawi, the Ministry of Labour should create a centre for industrial relations where short courses in the employment relationship will be conducted.

Dzimbiri said to improve the quality of industrial relations, government should also strengthen the Ministry of Labour to enable it perform its roles effectively.

The Department of Human Resource Management and the Development and the Ministry of Labour should also develop industrial relations policies that would foster harmony and worker productivity.

“Malawi aspires for long term sustainable growth and welfare improvements whose realisation has numerous human resource implications as well as the quantity, quality, and nature of employer-employee relationship,” says Dzimbiri in the paper.

He adds that since people are the ones who implement strategic visions and development policies, there is need to have an adequate understanding of the linkage between human resources and socio-economic development.

This, he points out, is the starting point for harnessing a conducive industrial relations system at organisation and national levels.

“Empirical studies have shown that the demand for staff to implement development strategies and meet industry demand is far greater now than ever before. Besides,” said Dzimbiri.

He said, however, there are numerous vacancies in government ministries and departments, accusing training institutions of not producing the right caliber of graduates required by industry and the public service.

Furthermore, there is abundant evidence of hostility between employers and employees creating animosity and a negative climate for increased worker productivity in Malawi even with the limited numbers of staff.

Dz imbiri is based at Chancellor College in Zomba and has also taught as a visiting professor at Galilee International Management Institute in Israel, the University of Botswana and Midlands State University in Zimbabwe.