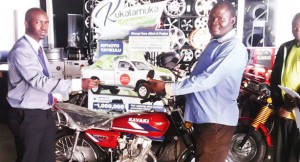 FMB has presented a Kavaki motor cycle to Chingame Farmers Club which emerged at the winner of a motor cycle in the first monthly draw of the FMB Kukatamuka promotion.

Presenting the prize to some members of the club, FMB Marketing Manager Widdey Nsona thanked them for being loyal customers and also encouraged to continue participating in the promotion because there are still grand prizes to be won, a brand new Toyota Hilux followed by a cash prize of K1 million.

The promotion is running from April to August 2015 and there are 62 monthly prizes to be won in addition to the grand prize of the Toyota Hilux and the second grand prize of K1 million.

To enter the promotion, individual tobacco farmers or clubs with an FMB Makwacha account need only to route their tobacco proceeds through their account. Other monthly prizes include 20 cell phones, twenty K10,000 fertilizer coupons, 10 sprayers, 10 bicycles, a bailing press and a motor cycle.

Nsona said both individual farmers as well as farmers’ clubs stand a chance to win as long as they receive their tobacco proceeds through the Makwacha account.