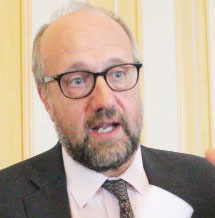 SADO—There were a lot of internal trading

Treasury recorded a deficit of K13.9 billion in January 2020, representing 0.2 percent of the Gross Domestic Product (GDP), from K33.9 billion recorded in the preceding month, latest figures from the Reserve Bank of Malawi (RBM) shows.

During the month under review, total revenues amounted to K110.4 billion against total expenditures of K124.3 billion.

Treasury had to borrow domestically to finance the deficit, an option seen to have detrimental effect to the economy as it entails crowding out the private sector.

In an interview yesterday, Treasury spokesperson, Davis Sado, said the narrowing of the deficit implies that there was an improvement in revenue collection, attributed to stability in the operating environment.

He said notwithstanding the coronavirus spread, fiscal performance looks positive in the remaining months of the 2019/20 fiscal year.

“In the first and second quarters of the year, there were many disturbances in the business environment due to a number of factors.

“As we went towards end of the first half, there was a bit of stability and people were able to do business. Equally there were a lot of internal trading and as a result of that the revenue collection body was able to collect more.

“There are two sides to this development; on one side, it is a good development as it shows that there is an improvement in fiscal discipline and also that revenue collection has increased in reference to expenditure or that expenditure has gone down with constant revenue.

“On the other hand, it is a sign that the government has reduced expenditure and if this reduction is at the cost of welfare and development then it is not a good thing,” Kachamba said.

In the first half of the current financial year, Treasury recorded a deficit of K165.7 billion, representing about 4 percent of GDP.

Malawi’s volatile economy, where businesses remain subdued and most sectors are not ticking, astounded by myriad woes emerging out of the May 21 2019 elections disputes, and long-term inconsistencies in policy direction.