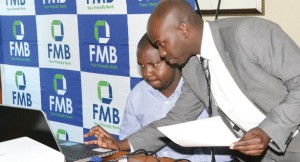 FMB conducted the first draw in its ongoing ‘Kukatamuka Promotion’ targeting tobacco farmers. The promotion will run from April to August 2015 with 62 monthly prizes to be won each month.

Speaking during the draw, FMB Head of Marketing & Corporate Social Responsibility Sylvia Mataka said; “in response to the positive response of the farmers towards the promotion, a decision has been made to give away a Toyota Hilux as a grand prize in addition to the initial K1 million grand prize”.

The Makwacha Account requires no minimum balance, has no monthly ledger fees and the ATM card is also free.

During the draw, the 62 winners comprised of both individual farmers and farmers’ clubs won assorted prizes including 20 cell phones, 20 fertilizer coupons, 10 sprayers, 10 bicycles, one bailing press and a motor cycle.

In a phone interview after the draw, a representative of Chagambe Farmers Club who won the top monthly prize said the club was excited with the prize and were motivated to continue banking with FMB.

In order to enter the promotion, individual tobacco farmers or clubs with an FMB Makwacha account are required to route their tobacco proceeds through their account. There is no requirement to keep a certain minimum balance in the account.