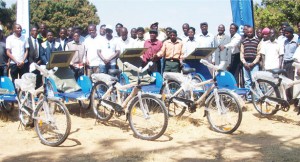 About 15,000 people Rumphi’s in Chirambo area are expected to benefit from bicycle ambulances which have been donated by First Merchant Bank (FMB) as part of their corporate social responsibility (CSR).

Before the ambulances arrived, communities in the area were travelling over 10 kilometres to access health services at Bolero Rural Health Center in the district.

FMB has donated the bicycle ambulances to four community based organisations that support community health services.

Speaking during the presentation ceremony at Chirambo CBO, FMB regional commercial manager for the north, Leman Chisi, said the donation is one way of showing the bank’s appreciation to the community for the support they give to the bank.

“We realised that we need to do something to the community because they have been supporting us in many ways. We had to look for the specific needs that are there in the community where we get the majority of our customers,” said Chisi.

He said the bank discovered that there are places where ambulances cannot reach and that the easiest way of alleviating the problem was to donate the bicycle ambulances.

Chisi said the ambulances will be able to assist people living around Chirambo because they can be easily managed.

Traditional leader for the area, Principal Kawaza Mawe, commended FMB for the donation which he described as timely.

“People were experiencing a lot of challenges due to lack of ambulance to carry patients to the hospital, more especially expectant mothers,” said the chief.

He also said due to lack of ambulance in the area, many lives were being lost as a result delays to take patients to the hospital.

Apart from Rumphi, FMB was also donated bicycle ambulances to other areas in Salima, Mponela and Liwonde. In total, the bank has donated 20 bicycle ambulances worth K5 million as part of celebrations to mark 20 years of its existence.