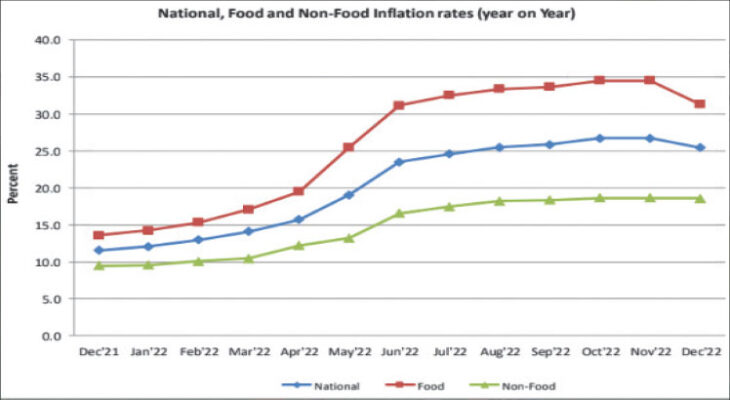 Malawians in the low-income bracket should brace up for increased food prices this year as the World Bank says this will have a knock-on effect on them, making it hard to survive.

For Blantyre-based Lane Nandoli, who works as a security guard, her monthly income at about K57 000, which is slightly above the country’s minimum wage at K50 000, means she will continue to struggle to afford basic food items in a month.

Speaking in an interview yesterday, she said sugar alone eats up about K6 000 of her monthly income as her family uses five packets, each packet costing about K1 500.

Nandoli, a mother of four, said she has been forced to cut on some basic items to survive.

“It is increasingly becoming difficult to even assist relations because there is no money for such. It just hand-to-mouth,” she said.

Similarly Martha Benson, a domestic worker in Namiwawa residential area in Blantyre, said life has changed from bad to worse due to rising food prices.

She said she is hardly managing to support her children in the village because of the rising food prices.

Benson, a mother of two, said: “I have to send my children money every month for food and other essentials. It is becoming difficult because the value of the money is declining each passing day.

“Every month, I have to take an advance pay to send extra cash to my children.”

In its January 2023 Food Security Update published on Friday, the World Bank said in developing countries such as Malawi, food prices, which have elevated inflationary pressures, will remain higher and more volatile than currently projected.

The World Bank said commodity prices are expected to remain above the most recent five-year average though agricultural prices are forecast to decline by five percent owing to better prospects for global production.

Reads the bank’s report in part: “For low-income countries, food supplies are likely to remain stressed because of limited grain imports, reduced fertiliser use and persistent weather conditions.”

Year-on-year headline inflation rate is currently at 25.4 percent, according to NSO.

This is largely on account of rising maize prices, which are hovering at an average of K500 per kilogramme (kg) or K25 000 per 50kg bag.

In Malawi, maize as part of the food component, contributes about 53.7 percent in the consumer price index, an aggregate basket of consumer goods and services for computing inflation.