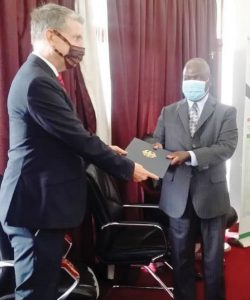 The German government has committed over €41million (about K35.7 billion) to help the local economy recover from the effects of the Covid-19 pandemic and enhance the fight against the same.

EDITORIAL NOTE: THIS IS A LOAN, NOT JUST FREE MONEY HANDED OVER BY GERMANY. AGAIN, IT IS A LOAN!!!

This follows the signing of an agreement between Malawi and Germany recently at Capital hill where the latter committed €28.1million (about K24.5 billion) under the financial cooperation arrangement targeting the reform agenda of the new Malawian government.

Germany provided additional €13.25 million (about K11.6 billion) solely for the fight against Covid-19.

Germany Ambassador to Malawi, Jürgen Borsch, said the commitments were made during bilateral negotiations on development cooperation between the Governments of Malawi and Germany in Lilongwe on October 29 2019.

Minister of Finance, Felix Mlusu, thanked the German government for the support.

The €28.1 million comes on top of German funding of €186 million which is currently being implemented in on-going programmes in these sectors.

A statement released after the signing of the agreement indicates that a new commitment of up to €3.1 million was agreed to support improvements in health service delivery in Malawi within the framework of the Health Sector Strategic Plan through the Health Services Joint Fund (HSJF).

Another commitment of up €13 million was agreed to support improvements in access to high quality sexual and reproductive health and rights information, products and services with particular focus on youth and rural populations.

€8 million was agreed to support improvements in living conditions of households which have been identified as ultra-poor and labour-constrained in project districts through receipt of cash transfers under the Social Cash Transfer Programme.