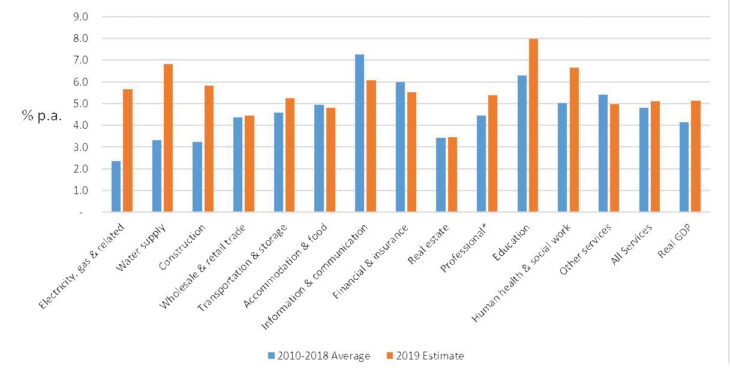 A situational analysis on services sector and trade in Malawi has highlighted slow economic growth and low income, low and unreliable power supply, over-liberalisation and gaps in national policy implementation among major threats to growth.

Findings of the study by Chancellor College-based economist, Ronald Mangani, were revealed on Monday at the opening of a three-day national stakeholders’ validation workshop.

It shows that the services sector. However, remains the main contributor to the Gross Domestic Product (GDP) at 52.4 percent.

By this metric, services sector input to the national economy surpassed agriculture in 1994.

Average annual growth in services value added has not been too different from agriculture growth, at 4.3 percent between1970 and 2017, but a surge in the services sector has been witnessed since 1995 when it has grown by an annual average of 5.2 percent.

But according to the report, among other things, prevailing unfriendly tax regime, limited incentives, corruption at national and regional levels and political interference

“Agriculture continues to employ upwards of 70 percent of those in employment, and the share has insignificantly fallen since 1991. Most of the few workers who moved out of agriculture went into services, but services employment only grew from 14.6 percent in 1991 to 19.9 percent in 2019, confirming that the growth in services has not created sufficient employment,” reads the report in part.

In an interview on the sidelines, Mangani said Malawi should restructure its services sector from one that is based on the importation, wholesaling and retailing of foreign products to one that is export-oriented and job-creating.

“Malawi should transform into a regime that gives due priority to the implementation of its visions, policies and strategies. Unless the country puts due emphasis on production and exportation of goods and services, it will not be able to benefit substantially from the trade agreements that it is participating in,” Mangani said.

Director of Trade in the Ministry of Trade, Clement Kumbemba, said despite the opportunities that services trade bring and the growing nature of the sector, it has been observed that the major services sector that contributes to GDP in Malawi are dominated by retailing and wholesaling activities.

“If you analyse this sector further, you will note that it does not provide much of the decent jobs and wages and also rely on imported products which drain much of the foreign exchange,” Kumbemba said.

On the other hand, total imports have grown even faster from $206.6 million to $3.2 billion, averaging $1.3 billion per annum.