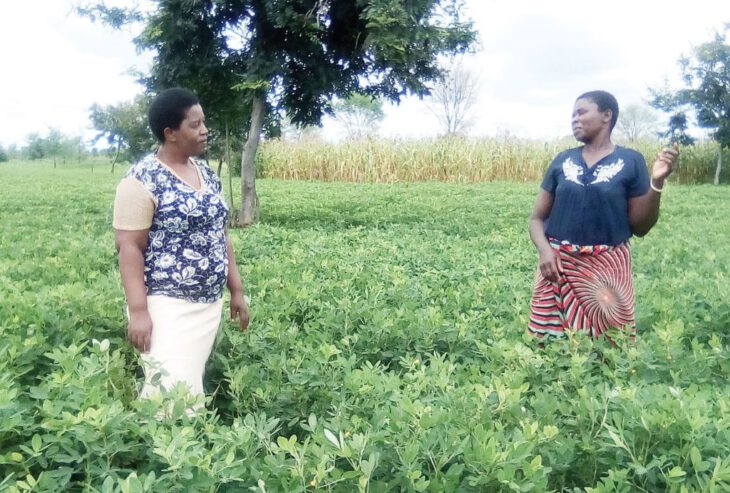 Gone should be the days when Malawi would only heavily depend on tobacco and tea as major cash crops and top forex earners.

The painful fact is that things have changed and the sooner farmers accept this reality, the better.

Slowly but surely, farmers in the country are understanding that there is gold in groundnuts, to the extent that some are producing the crop in large quantities for commercial purposes amid challenges in accessing capital.

Sensing the opportunity, some farmers in Salima District in Traditional Authority (T/A) Kalonga would not afford to be left behind as they embrace the changes on the marketing.

In 2017, Chilimika Cooperative was formed bringing together groundnuts producers.

The group projects a bumper yield this season, according to Chilimika Cooperative Chairperson, Manase Chijaro.

Manase says the group has managed to grow on 8.2 hectares of CG 11 groundnuts and expecting to harvest 2,000 kilogrammes.

“This is the first time we are planting CG 11 seed, all along we have been planting CG 7 seed. We were told on the good farming practices to enable us have a good harvest. We have managed to plant the seeds on 8.2 hectares and we expect to make a reasonably 2000 kilograms,” Manase says.

Apart from making the cool cash from proceeds of the sells, Chijero also says the crop is essential in nutrition value.

Chijero said Chilimika Cooperative comprised 60 members but due to other pressing factors only 11 members stepped up the efforts to grow groundnuts.

The Alliance for Green Revolution on Africa (Agra) under the project Drought Tolerant Maize and Rosette Resistant Groundnut Varieties is advocating production of the crop.

Mwatitha Bayinati, a beneficiary of the programme says the initiative is ideal.

“Together with my family, which has been instrumental helping with the fields, we are planning to increase capacity,” she says.

Bayinati, however, says the corporation is facing numerous challenges including limited access to stable markets.

“The farmers are on contract where they are growing CG 11 groundnuts seed and they are selling on collective marketing which the Ministry of Agriculture, Irrigation and Water Development also encourage,” Kafunda says.

Meanwhile, Global Seed Company is prepared to purchase the groundnuts from the group this season.

According to Global Seed Company, Sells and Marketing Officer, Grey Chibwe, measures have been put in place to ensure that everyone benefit from the deal.

“As the company, we are prepared to purchase the groundnuts from the farmers at a good price without any conflicts because we already signed a contract,” Chibwe says.

Agra Country Director, Sofie Chitedze, says she is impressed with what farmers are doing to address food shortages and improve their economy status.

She says “the fields look impressive and that shows that this year’s harvests will be good.”

Through Agriculture Commercialization initiative, the government is targeting smallholder farmers, encouraging them to work in groups to be competitive and have strong bargaining power on the market.