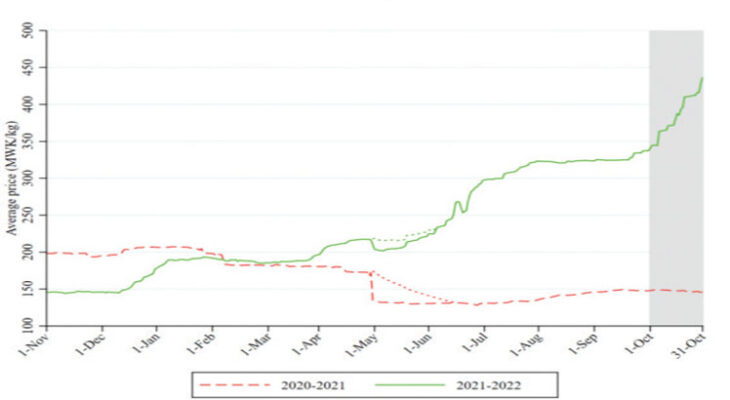 Grain Traders Association of Malawi has described the re-opening of Agricultural Development and Marketing Corporation (Admarc) planned for December 1 2022, a necessary and urgent action that government had to take place if the country is to manage the looming hunger.

The association’s president Grace Mijiga Mhango said this on Wednesday in reaction to government’s announcement on Monday that it would re-open the State produce trader which will be selling the staple grain at K300 per kg or K15 000 per kg.

At K300 per kg, the staple grain would be K200 cheaper than the current market price for the commodity at K500 per kg, a price which is significantly above the five-year averages for the post-harvest period.

Mhango has since indicated that the decision is a timely step, saying the current maize prices were slowly going to graduate more Malawians into vulnerable groups due to affordability issues.

“As we speak, we have an alarming number of vulnerable Malawians that are targeted for humanitarian aid. The majority on the other hand cannot afford the current prices at k25 000 for a 50 kg bag.

“The closure of Admarc was, therefore, dangerous as it could have escalated hunger in the country,” she said

Mhango, while indicating that the price of K300 per kg is ideal in terms of price stabilisation, said high level of discipline in terms of the volume one can buy at a given time will be critical.

She said: “If not well-managed we will see heavy queues at Admarc which will make it even more difficult to access. Their rationing strategy has to come into play; otherwise, we will be creating another big problem for consumers because the parrarel market will push prices even higher.”

Mhango also called for the need for government to ensure that it has enough commercial maize and related logistics to make maize available across all maize deficit areas especially where maize is already above K500 per kilogramme.

Minister of Agriculture Sam Kawale on Monday said government has commited to flood the market so that there is a huge supply of cheap maize which is not going to bring down but reach deserved Malawians.

“We know of the existence of some people who take advantage of Admarc’s cheap maize to connive with maize vendors to buy in bulk and sell at a higher price but we are putting in place measures to ensure that the people who are going to be selling the maize are trustworthy.

“We also have committees around Admarc depots. We are going to activate them to ensure that maize does not go to wrong people,” he said.

Maize prices have hit record highs in recent weeks with the International Food Policy Research Institute (Ifpri) showing that in October maize prices reported a 23 percent increase to an average of K412 per kg and continued to sell the highest in the Southern Region.

Agriculture policy analyst Tamani Nkhono-Mvula, in an interview on Tuesday, also described the re-opening of Admarc as a positive step that would help tame prices.

“What institutions like Admarc do is that in situations where maize prices are going up, they supply maize on the market at reasonable prices.