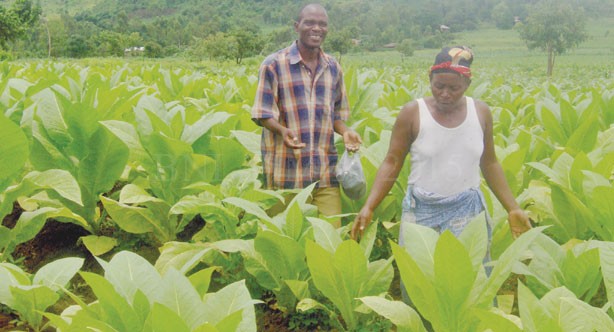 Tobacco farmers in Mzimba have asked government to engage in discussions with commercial banks for harmonisation of exchange rates for tobacco growers.

Speaking at his farm on Sunday at Enyezini in the district where Minister of Agriculture, Irrigation and Water Development Allan Chiyembekeza was visiting farmers in the district, Hendrix Mwanza said high interest rates were also making it difficult for growers to service their loans with commercial banks.

Mwanza – who grows tobacco under contract with JTI, wondered why commercial banks charge in US dollars when the kwacha depreciates but charge in kwacha when the local currency appreciates.

He also said although contract farming has made it easier for growers to secure loans from banks, high interest rates were making it difficult for them to service their loans.

“It is not surprising that most farmers fail to settle loans because they make losses at the end,” said Mwanza.

Responding to Mwanza’s concerns, Chiyembekeza assured the farmers that his ministry would engage the banks on the issues.

Mzuzu Agricultural Development Division Programmes Manager Agness Moyo thanked merchants for coming in to support farmers through the Integrated Production (IPS) system saying without them tobacco would be a failure.