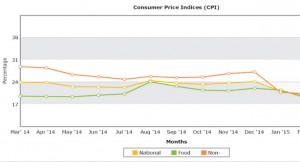 Nico General Insurance Company Limited says some economic challenges such as high inflation rates, which Malawi is facing, might affect the performance of the insurance industry in the country.

The company’s Chief Finance Officer Louis Sibande made the remarks on Friday in Mangochi during a retreat the company hosted for its brokers with an aim of sharing with them challenges that exist in the industry in the current year.

Sibande observed that the country’s high inflation and interests rates as well as unstable fuel prices are among other obstacles which players in the industry need to find ways of overcoming if the industry is to record desirable growth and profits in 2015.

“Malawi has the highest inflation rate in the whole Southern African.

For businesses such as insurance to survive, there in need to operate above the inflation rate and this cannot be easy considering the rate at which the country’s inflation is hovering around,” said Sibande.

Despite the said challenges, Sibande said Nico General has set its site on posting a net profit of K1.7 billion which is slightly higher than last year’s K1.4 billion. He added that the profit would correspond with a growth in premiums of 24 percent.

“About K800 million of the K1.7 billion profit is expected to come from technical services while the balance will be raised from investments,” he added.

Last year, the company posted 25 percent growth in premiums. Sibande attributed the marginal decline in premiums growth this year to high inflation rates, unstable exchange rates, unstable oil prices as well as an increase in fraud in the industry.

“We are working hard to mitigate the effects of these factors by, among other things, diversifying to other fields of insurance such as agriculture insurance which we hope to introduce very soon, as well as engaging independent assessors to evaluate claims to detect fraud,” said Sibande.