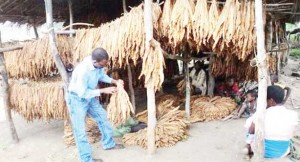 Tobacco Association of Malawi (Tama) expects prices for the leaf to be higher this year as compared to the last growing season based on preliminary findings showing that less tobacco has been grown this year.

Tama President, Reuben Maigwa, is optimistic that farmers will get better returns if the market obeys the theory of demand and supply.

“Comparing the amount of tobacco farmers have grown this year to the previous year, the demand will be higher and that is an indication that prices will go up,” he said.

But Maigwa said buyers will be key to whether or not this happens.

He also expects prices to be better this year but said that will depend on the quality of the leaf that farmers will bring on the market.

“Dates are not yet set but we are sure the market will start this April. What is required on the market is 152 million kilogrammes of all tobacco types, so we are hopeful prices will be better this year. Farmers ought to be mindful of the quality because it also determines the prices,” Luka said.