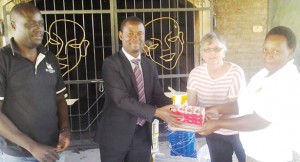 The Institute of Internal Auditors Malawi (IIA Malawi) says auditing a specialised field on its own and that being an accountant does not necessarily qualify one to be an auditor.

He was speaking on Saturday at Chombo Village in Blantyre when the internal auditors donated assorted items to an orphanage as part of the Internal Audit Awareness Month which falls in the month of May.

Nyirenda said it is important for auditing professionals to specialise in audit by acquiring certifications in internal auditing provided by IIA Global.

He said the Bachelor of Internal Auditing degree being offered in the country also provides a good foundation for internal auditing professionals.

He said the focus of internal auditing goes beyond financial statements but also looks at other areas such as governance, risk management and internal controls in an organisation.

“Even churches should have an internal auditor because some churches undertake huge projects and there is need to enhance credibility and governance in the administration. In that respect, the internal audit function would add value,” he said.

As part of the celebrations, internal auditors in the Central Region donated assorted items at Malingunde School for the Blind while those in the north donated to the Pediatric Ward at Mzuzu Hospital.