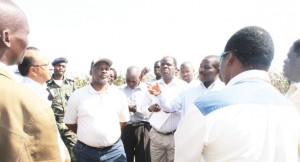 Illovo Sugar Group has this year invested over K25 million for the production of maize under irrigation at its Dwangwa Estate in Nkhotakota as its contribution in addressing the issue of food shortage in the country.

Illovo’s Dwangwa Estate general manager, Lal Bachan, said the company has already planted the maize on a 37.7 hectare piece of land and expects to produce 180,000 kilogrammes of maize from the venture.

He said upon harvest, the maize will be distributed to needy people in communities surrounding the estate and other parts of the district.

On Friday, Illovo hosted Minister of Agriculture Allan Chiyembekeza on a tour of the maize field.

Bachan told Chiyembekeza that the company has decided to respond to government’s appeal for relief food assistance through maize production at its estate.

“This is our modest contribution to food security in response to food shortages in the country,” said Bachan.

Speaking after touring the maize field, Chiyembekeza commended Illovo for the initiative.

“People have always wondered why we can’t grow maize on a larger scale under irrigation. Illovo has impressively shown to us that it is doable,” said Chiyembekeza.

He said the initiative would go a long way in easing challenges of food scarcity in the country.