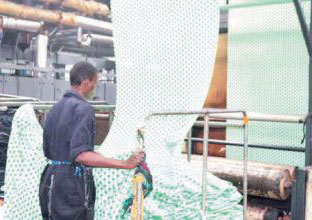 The International Monetary Fund (IMF) has project that the local economy could swell by 6 to 7 percent in the medium term, owing to strategies put in place by the government to ensure resilience to climate change shocks.

The Bretton Woods institution further premises their projection on improved access to finance, crop diversification and an improved business climate seen in the economy.

This is contained in a recent statement released by the Fund at the end of the Extended Credit Facility (ECF) programme review meetings.

Among others, the statement notes that local authorities regained control over the budget in the first half of the 2019/20 financial year by deploying measures to enhance spending efficiencies and address revenue shortfalls in the fiscal year.

It further indicates that the government expects to shift to a positive domestic primary balance in the coming years.

“They are committed to repaying arrears accumulated in recent years and addressing shortfalls in the system that led to them. The government will continue enhancing tax policy and revenue administration,” reads the statement in part.

IMF has since urged government to strengthen transparency in the budget process, the medium-term budgetary framework, cash management, and routinised bank reconciliation as well as gradual upgrading of the existing public financial management systems.

“Monetary policy remains focused on preserving price stability over the medium term. Banking system resilience continues to improve, with non-performing loans (NPLs) declining over the last three years and improved provisioning. Credit to the private sector has picked up in recent months but sustainably increasing access to finance will require addressing structural barriers, such as challenges with the collateral registry, mobile banking, and property rights,” reads the statement.

IMF Resident Representative, Farayi Gwenhamo, indicated that determinations as to whether the performance is on track and whether another tranche will be disbursed under the programme will be made later as discussions are continuing.

In November last year, IMF approved $43.3 million to Malawi under the ECF bringing total disbursements under the arrangement to $73.9 million.

The three-year ECF arrangement was approved on April 30, 2018 for $107.7 million to support the country’s economic and financial reforms.