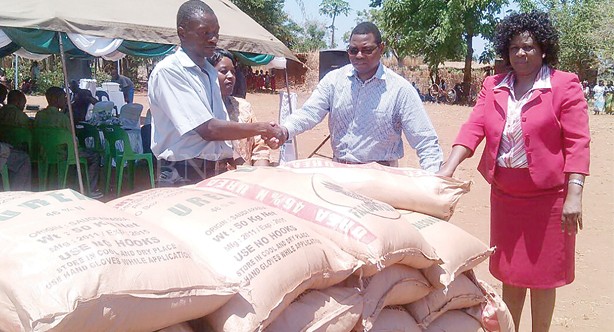 Indebank, on Friday donated fertilizer and maize seeds worth K600, 000 to 32 visually impaired men of Chingulume Settlement Scheme in Salima.

According to the bank’s Deputy Chief Executive Officer George Namandwa, Indebank decided to focus its corporate social responsibility programmes for 2014 towards assisting those with visual challenges.

“We are mindful that your challenges are many and this donation may just be a drop in the ocean, but at times, just a little push can create the necessary momentum for people to significantly change their lives. Use the farm inputs prudently so that you produce enough food for the whole year and reserve some to sell,” Namandwa told the beneficiaries.

He also hailed the Malawi Council for the Handicapped (Macoha) for securing the land that is being used by the visually impaired.

“For Macoha to secure part of the land for use by the visually impaired and blind persons for agricultural activities is quite a milestone in respect of feeding their families and earning a decent living through the sale Namandwa.

The beneficiaries hailed the bank for the donation which they described as timely since it came as the country is gearing up for the rainy season.