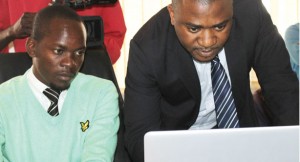 Lilongwe based business woman, Patricia Mnyenyembe, became the second lucky winner of an iPhone 6 in the monthly draw of the ongoing Indebank Phwamwamwa Promotion.

During the draw held on Wednesday at Indebank head offices in Blantyre, several other lucky winners went away with various consolation prizes including bicycles and branded Indebank golf shirts, t-shirts and caps.

Indebank acting Head of Personal and SME Banking, Davie Kavinya told journalists who witnessed the draw that the bank is impressed with the growth of savings among its customers following the launch of the promotion.

He also expressed satisfaction with impact the Phwamwamwa promotion has had increased deposits base and the business in turn.

“There is hope for growth in terms of customers following the launch of the promotion some two months ago,” said Kavinya.

At the end of the promotion, one winner is expected to walk away with a grand prize of K2 million. Other prizes to be won include maize mills.

To enter the promotion, a customer has to open a savings account and make a K20, 000 deposit into the account