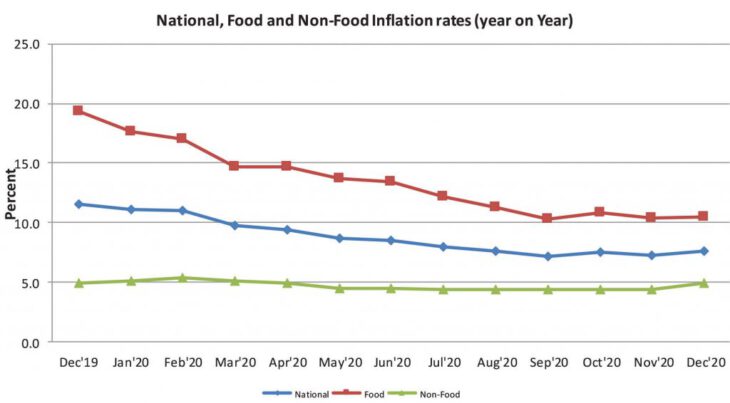 Headline inflation registered an average rate of 8.6 percent in 2020 which is 1.2 percentage points lower than the preceding year, 2019, when it averaged 9.4 percent, latest figures from the National Statistical Office (NSO) indicate.

The figures further indicate that headline inflation—year on year—for the month of December has declined to 7.6 percent from 11.5 percent registered the same month in 2019.

The 7.6 percent registered in December indicates 0.3 percentage points increase in headline month-on-month inflation from November in which inflation was at 7.3 percent while Food and Non- Food Inflation rates were at 10.5 and 4.9 percent, respectively

Malawi’s inflation is sensitive to external forces such as fuel prices and increase in imports due to the country’s over reliance on imports.

The local inflation is also reactive to maize availability and prices on the local market rates.

Under normal circumstances, good inflation rates, as one of macroeconomic indicators, signals that the economy has been good in the year under review.

Commenting on the figures however, economist from the Polytechnic Betchani Tcheleni says even though this was supposed to signal a good economy, that had not been the case in 2020.

Tcheleni believes inflation has been stable because the economy has been dormant due to the Covid-19 pandemic which hampered trade.

The Covid-19 pandemic which hit Malawi with the first wave in April last year, has disturbed trade patterns, affecting both imports and exports.