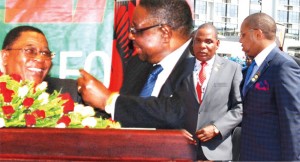 Lilongwe city’s Bingu International Conference Centre and the city centre were abuzz with excitement about the Malawi Investment Forum taking place in the capital city despite Africa richest man Aliko Dangote’s failure to turn up for the event.

Dangote, owner of Dangote Group, was on the Very Important Persons list of foreign speakers to attend the first ever forum of such nature in Malawi and his confirmation to attend excited local business operators who were eager to learn from the successful entrepreneur.

Both Malawi Investment Trade Centre (MITC) and the Ministry of Industry and Trade could not give reasons on the absence of Dangote.

According to other sources, Dangote failed to show up at the meeting because he is fasting.

The MIF 2015 handbook had indicated that Dangote was going to make his remarks at the forum at 9.50 am immediately after remarks by Dean of the Diplomatic Community, Thandiwe Dumbutchena.

However, during the remarks session, Dangote was replaced by Sadc Executive Secretary Stergomena Tax.

Local businessman Mike Mlombwa said the absence of Dangote is a disappointment to the local entrepreneurs.

“We were looking forward to his [Dangote]’s motivational talk. As business operators, we thought we will be able to learn a thing or two from the expert,” he said.

Mlombwa, however, said the absence of Dangote will not affect the forum.

“There is still more that we will learn from the forum and as business people, we should be able to benefit at the end of the day,” he said.

Business started with the official opening by President Peter Mutharika which was followed by breakaway sessions in the afternoon.

The Malawi Investment Forum 2015 has brought together influential investors from various sectors such as tourism, energy, manufacturing, infrastructure, agriculture and services, offering access to a wealth of information as it relates to the various investment opportunities that are abound in Malawi.