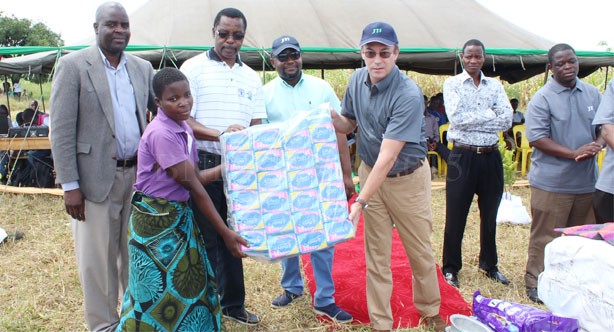 In response to devastating floods that hit the country, Japan Tobacco International (JTI) has donated relief items worth K100 million to its contracted growers and other communities in the country.

This year’s floods has been described by both local and international relief agencies as the worst in the country’s history, leaving hundreds of people dead or missing and destroying homes and crops.

Speaking during the handover ceremony in the area of Traditional Authority Chikowi in Zomba, JTI Leaf Malawi Managing Director Flies Vanneste said his company was moved by the plight of the farmers affected as the result of floods.

“Moved by the plight of those affected and in response, JTI both at local and international level deployed various types of interventions to support the country during these hard times” said Vanneste.

Vanneste said the JTI Flood Disaster Response plan shows company’s commitment to work in partnership with growers who are contracted with it directly.

“Contractual relationships or IPS allows for each player to share problems and develop joint solutions that bring about win-win solutions,” he said.

He further said the agricultural practices being practiced in IPS will in the long-term reduce the impact of disasters as they are also addressing the environmental issues that are partly causing disasters.

“The short term solutions aim to address the immediate needs of growers affected, while the long-term approaches like the tree planting hinge on good agricultural practices that if adhered to will help grower communities mitigate the effects of climate change such as flooding,” said Vanneste.

In his remarks, Group Village Head Kazembe commended JTI for the support.

“A friend in need is friend indeed and JTI has just demonstrated that by assisting us”, Kazembe said.

The items donated ranged from assorted items ranging from food to clothes, blankets and other domestic items and will benefit people affected by floods in Mangochi, Machinga, Zomba, Chiradzulu, Phalombe, Chikwawa and Mulanje.