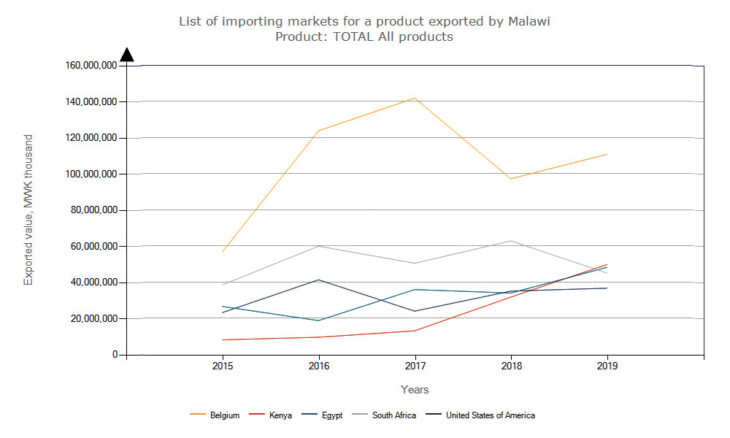 According to figures from the ITC, Malawi exported goods worth K49.7 billion to Kenya in 2019 the highest figure from any of Malawi’s trading partners on the continent.

Around the world Kenya comes second after Belgium which imported goods from Malawi worth K110.6 billion in the year under review.

Other export destinations for Malawi making the top five on the continent include Egypt at K48.1 billion, South Africa at K44.9 billion, Tanzania at K23.3 billion and Zambia at K22.7 billion.

However, Tanzania is the fastest growing market for Malawian products having grown by 100 percent when compared to K11.6 billion worth of exports recorded in 2018.

Zimbabwe which in 2019 imported goods worth K16.8 billion from Malawi is the only country that has fallen out of the top five replaced by Zambia.

Globally top five markets for Malawian products include Belgium at K110.6 billion, United States of America at K36.5 billion, the Nethelands at K26.4 billion, China at K25.8 billion, and Russia at K24.1 billion.

Commenting on the development economist, Betchani Tcheleni, said in the past years, homogeneity in products produced targeting each other’s market has grown for Zambia and Malawi but also Malawi and Mozambique.

He said the commodities under scrutiny are agricultural in nature, which makes it hard for Malawi to export to Zambia.

On Tanzania, however, Tcheleni holds that there are the same agricultural commodities which are a hot sell there, hence the growing trade.

“Kenyas love our tea, they also buy some sugar from us together with some tobacco. They also buy groundnuts. We must look to South Africa as a big brother who likes to sell to more than buying. They too have been looking to other parts of the world such as Israel.

“But also remember that the South African Rand has not performed well the past few years making exports to that country unattractive, It must be a concern though that from the trade theory point of view we expected more trade between Malawi and her immediate neighbours,” Tcheleni said.

He added that seeing trade improving only in one country means there is something wrong and the country needs to work on its relations and own niche of products which should be attractive to these neighbours.