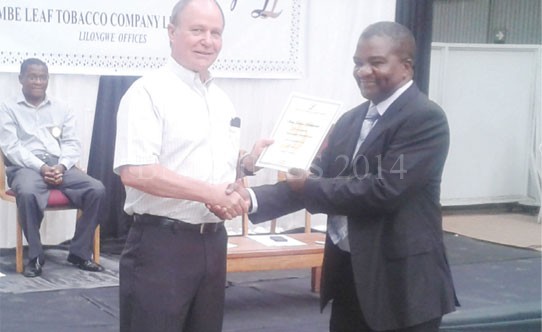 Limbe Leaf Tobacco over the weekend awarded several permanent and seasonal workers who have been serving the company for at least 15 years.

The company’s Managing Director, Rodney Hagger presented the awards at Kanengo, where some workers were recognised for serving the company for as long as 35 years.

“These are the employees who are serving the company even during difficult seasons like the last one. This is just one of the ways we use to reward such hard working staff and it is not the first time we are doing it,” said Hagger.

One of the employees representing the awardees, Joseph Zikabuma, who has been serving the company since 1982 said the company ensures the staff are well looked after through many ways like rewarding of loyalty.

“Today the economy is not well and the business sector is not spared, but the company has maintained its position to thank long serving employees with awards. We sincerely appreciate this and we are thankful,” he said.

The company, one of the oldest tobacco buyers in the country, has an investment value of US$180 million with over 5,000 employees.