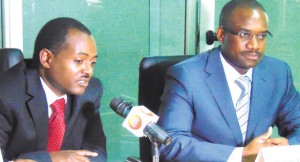 Malawi’s AHL Commodities Exchange (AHCX) and the Ethiopia Commodity Exchange (ECX) on Friday signed an agreement of cooperation that will, among other things, allow farmers and traders from the two countries sell their produce through the two commodity exchanges.

The agreement was signed during a ceremony held at the ECX head offices in Addis Ababa where a delegation from Malawi was on a study tour of the Ethiopian commodities market.

Speaking after signing the agreement, AHCX board chairperson, Evans Matabwa, said the agreement follows visits to the ECX by President Peter Mutharika earlier this year, which was followed by another visit by Minister of Industry and Trade Joseph Mwanamvekha and Minister of Agriculture Allan Chiyembekeza.

“During his visit, President Mutharika appreciated ECX as a model for Africa and asked us to explore areas of collaboration with ECX. That is why the ministers came later and that’s why we are also here,” said Matabwa.

He said after the signing ceremony of the agreement, there will be traffic of officials from Malawi to ECX and vice versa to enable Malawi catch up with Ethiopia on commodities marketing through the exchange.

Matabwa said apart from sharing knowledge on operational and policy matters, the agreement will also provide access to market information on commodities and will also induce actual trade on commodities between Malawi and Ethiopia.

“A Malawian exporter will be able to pass through ECX to export across the world and an Ethiopian exporter will also be able use AHCX to sell commodities to international buyers,” said Matabwa.

“The development of ECX to this level has transformed 3.5 million Ethiopian farmers and other people on the value chain whose lives are now much better off economically. Malawi can achieve the same and we are ready to support you,” said Eshets.

“That way, we can increase our bargaining power on the world markets and get the highest prices of commodities for the benefit of our farmers,” said Eshets.