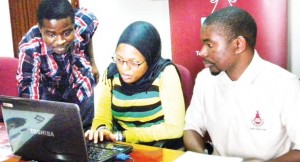 The Malawi Savings Bank (MSB) has said through its ongoing icash promotion, it has managed to see a 60 percent customer growth rate.

This was said on Friday during the third draw of the promotion held at the bank’s head office.

MSB marketing officer Edmund Mfutso said the promotion has attracted more customers and as a bank they are able to achieve their objective.

He said the i-cash promotion is aimed at sensitizing old and new customers of the advantages of using the i-cash card.

“The promotion is based on the i-cash card which provides exceptional convenience in transacting on our ATMs located nationwide, even on other bank’s ATMs using the Natswitch platform,” he said.

During the draw, seven lucky customers went away with different prizes.

The three other winners went away with a consolation prize of MSB branded umbrellas.

Mfutso said so far, 21 customers out of 24 have won different prizes.

He said the excitement will reach its climax next month in the grand draw as the bank gives out the much sought after Samsung Galaxy S3, a trendy Galaxy 10.1 tablet and a 24- inch plasma TV.

“We made sure that we selected the prizes that are valuable, reflect the current trends in life which will better our customers’ lives,” said Mfutso.