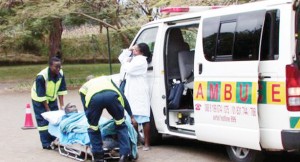 The Medical Society of Malawi (Masm) on Monday held its annual general meeting in Lilongwe where members reviewed its financial results for 2014 which are showing growth trends after a run of financial woes previously.

Masm Chief Executive Officer Sydney Chikoti told the journalists after the meeting that in the year just passed, the society has registered financial results due to good performance on revenue.

“We saw a positive trend last year when our balance sheet was positive due to improved remittance of subscriptions and that helped revenue inflows,” said Chikoti.

The society registered contribution, revenue of K7.5 billion in the year under review when the membership grew marginally to 123, 278.

During the meeting, Masm board chairman Evans Matabwa said the company needs to increase membership substantially as a large section of the Malawi population is still not under medical aid.

“We should be able to see half of the country’s population on Masm someday- that will make Masm not only increase membership but also revenue that will enable introduction of more innovations and investments to improve service delivery,” said Matabwa.

The society has meanwhile resolved to let its hospital facilities and pharmacies be run independently for efficient operations.