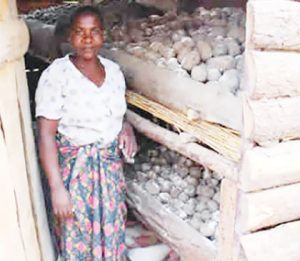 Dedza District is known for cultivation of Irish potatoes and tobacco since time immemorial.

Only tobacco is still regarded by many as a viable cash crop despite prices declining on the market over the years due to the global anti-smoking campaign.

However, in recent years, some Irish potato farmers have proven that the crop can surpass tobacco as they are able to make millions of kwacha annually from sales of Irish potato locally known as mbatatesi or kachewere.

Velemu Chizulu, 43, from Mbodzi Village, Traditional Authority Kasumbu, is among a few farmers that have made themselves millionaires through commercial Irish potato farming using modern techniques.

He started growing Irish potato in 1996 but, for years, was not making enough profits due to lack of advisory services on modern farming methods.

“I was struggling a lot. My family was starving. I was living in a grass-thatched house and had one pair of trousers. Life was not easy at all,” Chizulu says.

Luckily, in 2005, International Potato Centre (CIP) came in and introduced modern techniques of growing mbatatesi to Chizulu and fellow farmers which eventually boosted yield and quality of the crop.

“My life is now transformed. I am no longer Chizulu people used to know. I have a big decent house which is powered by solar energy.

“I use the solar power for my household energy needs and make extra money from people who come to recharge their mobile phones,” he says.

“The maize mi l ls are a blessing to women of my village because they no longer travel long distances to process flour.

“The pickup vehicle helps me transport Irish potatoes from farm to markets,” he says.

Chizulu explains that he grows Irish potatoes on a three-hectare piece of land twice a year and makes a profit of up to K2 million annually.

“I am able to accord my family a decent lifestyle. I pay school fees for my two children who are both in secondary school. My first born is in Form Three while the second is in Form One,” he says.

Chizulu sells the Irish potatoes to vendors both within and outside Dedza. He takes the produce to Lilongwe, Mchinji and as far as Chipata in Zambia. He is also into Irish potato seed production.

Leonard Mideyo, 48, from Nkungumbe Village, T/A Kamenyagwaza, is another Irish potato farmer with a success story to tell. Mideyo says he grows Irish potatoes more than twice a year on a hectare and makes a profit of K2 million every year.

“I started growing Irish potatoes way back in 1979 but was not making profits due to poor quality as I could intercrop it with maize.

He adds that he does not go out to search for buyers because they follow him right at his farm.

“I do not search for buyers. They come to my home to buy potatoes because good quality. I put up sign posts all the way from the main road to lead buyers to my place.

“From the sales of potatoes, I bought myself two pickups which fellow farmers hire to transport their produce to Bembeke Market,” Mideyo says.

He adds that, using the proceeds accumulated over the past 10 years, he has constructed a big house and bought pigs, goats, cattle and chickens.

Even women are making a killing out of Irish potato farming in Dedza.

Among other things, farmers are advised to ensure that they plant good quality potato tubers.

“We also promote improved potato varieties such as Mwai, Chuma, Zikomo and Thandizo because they are high yielding,” Mvula says.—Mana