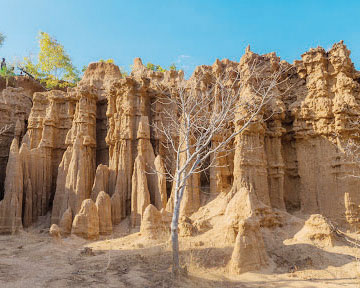 Minister of Tourism, Wildlife and Culture Michael Usi has said the country needs to invest heavily in the tourism sector, rating it as the next big thing for the Malawi economy.

He was speaking when he toured like Zoa Falls in Thyolo District and Malape Pillars in Machinga District, some of the country’s tourism sites.

Usi said tourism had vast potential of becoming the key source of forex to the country and contribute substantially towards growth of the economy.

He said the two tourism sites had capacity to help communities around them and also become hubs of tourism.

“This can easily transform the lives of the communities around while boosting our economy.

“Zoa Falls has potential of creating employment; the traditional dances performed here are informative. As we are aware that culture describes people; what we wear, eat and how we live is essential. So, the government plans to first empower the communities so that they can be active,” Usi said.

He said the sector had vast potential to contribute towards the government’s ambition of creating over a million jobs.

He said, if well managed, the site could help communities around and become and ideal site for tourists.

“Looking at number of people visiting this place, especially on weekends, if we can have proper structures and facilities around, the country could make the most of the site” Nkhataombera said

Situated in Thyolo, about 100 kilometers from Blantyre, on Ruo River which borders Mozambique, Zoa Falls is unique and shares some similarities with those of Victoria Falls.

Meanwhile, Usi has said the government has engaged the private sector to invest in Malape Pillars.

The Malape Pillars are believed to have been formed by the geological movement of land over 100 years ago.

For a long time local people have been visiting the area to appreciate the pillars.

However, Usi said little has been done to make the area more convenient and attractive to foreign tourists.

“The Malape Pillars are one of the country’s geological heritage sites which have the potential to attract tourists if the place could be well developed and promoted. We have already talked to some partners, who have agreed to sink boreholes and construct some modern facilities which will offer a complete package to tourists,” he said.

Paramount Chief Kawinga appealed to the government to engage people who could train the newly formed cultural troop.

He said Yao people had a diverse culture which can be utilised by the grouping if the group can be well trained in the cultural.