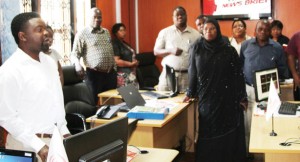 The Malawi Communications Regulatory Authority (Macra) says it is coordinating the development of a law that will help Malawi fight cyber crime which poses a serious threat to the country.

Macra deputy director general, Francis Bisika, has since called on members of Parliament to join a new warfare against crime in the cyber world.

He was speaking when members of the Parliamentary Media Committee visited Macra head offices in Blantyre on Friday 11th September, 2015

“We all know about the conventional physical crime but there is a new contemporary crime that is wrecking havoc in the cyber world,” said Bisika.

He said Macra had taken a strong stance against cyber crime and asked the MPs to support legislation brought before the National Assembly aimed at addressing the challenges that had been brought by technological advancements.

Parliamentary Media and Communications Committee chairperson Sam Kawale said he was glad that the relationship his committee has forged with stakeholders in the communications sector keeps growing strong.

Kawale asked players in the sector to develop the habit of sharing with the committee their success stories not just their struggles.

“What is often shared with us are the low moments. We would like the stakeholders to share with us their success stories as well,” said Kawale.

Members of the committee were taken on a tour of Macra’s Broadcasting Monitoring Unit, the Consolidated ICT Regulatory Management System (CIRMS) network operating centre and the Spectrum Monitoring Van.