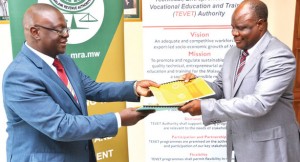 The Technical Entrepreneurial and Vocational Education and Training Authority (Teveta) on Tuesday signed an agreement with the Malawi Revenue Authority (MRA), which will see the tax body collecting Tevet levy from employers starting November 1, 2015.

Speaking during the signing ceremony for the agreement, MRA commissioner general, Tom Malata, said Tevet levy collections are expected to double from K3 billion to about K6 billion per year with the involvement of his authority in the task.

“It will not be difficult for our officers to collect the levy because we have the skills and experience in the administration of Pay As You Earn which is drawn from the same source as the Tevet levy,” said Malata.

He said MRA will also use its tax investigations and audit divisions to deal with non-compliance in the payment of this levy.

MRA will also take-over the responsibility of collecting outstanding balances on the Tevet levy.

On his part, Teveta board chairperson Gilbert Chilinde said the shifting of the levy collection responsibility from Teveta to MRA will enhance collections and helping his organization in its activities and operations.

He said the arrangement will also help Teveta to focus on its core duties of supporting training instead of collecting the levy.