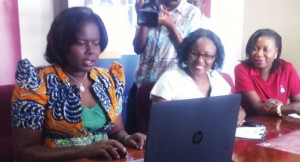 Malawi Savings Bank (MSB) last Friday held a final draw of its iCash promotion which saw Thyolo-based Regina Maliro walking away with a plasma television screen as the grand prize.

The promotion, which was aimed at increasing the visibility of the bank’s recently introduced iCash card and services on ATM, run for four months.

Speaking at the end of the promotion, MSB’s business development and marketing manager, Brenda Chilima, described it as a “success”.

She said the promotion received more than 500,000 entries despite uncertainties emanating from the bank’s recapitalisation which coincided with the promotion.

“Despite the uncertainties, our customers maintained the trust in us,” said Chilima.

Meanwhile, MSB is still running a Mponda Makwacha promotion with a grand prize money of K4 million up for grabs by September 30, 2015.