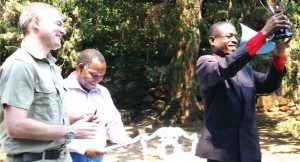 The awards were presented on Thursday, October 2 at Huntington House at Satemwa Tea Estate in Thyolo where celebrations to mark this year’s International Coffee Day were held.

Camal in partnership with African Fine Coffees Association (AFCA) and the Coffee Quality Institute awarded Mzuzu Coffee for emerging the winner of the 2015 National Taste of Harvest Coffee Competition.

Mzuzu Coffee and Sable Farming, which dominated the awards, are to showcase their competences at an AFCA conference and exhibition to take place in Zanzibar in February next year.