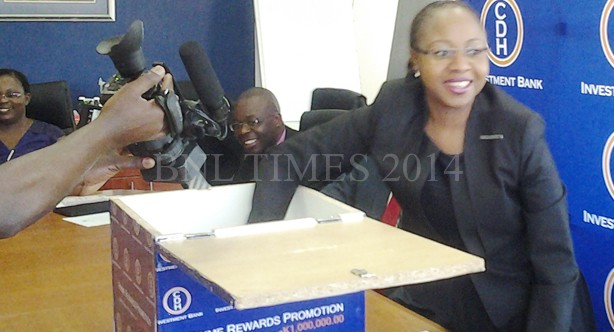 Mtambo was on cloud nine when CDHIB officials called him to inform him about his luck on Tuesday.

“I am very happy. I don’t know what to say,” said Mtambo.

CDHIB Chief Executive Officer, Misheck Esau, said the promotion — which ran from June 2 to October 3, 2014 was designed to encourage customers to save.

He disclosed that since the launch of the campaign, the bank has given out weekly prizes of K200,000 to 18 lucky winners totaling to K3.6 million.

“The campaign has been a success owing to the impressive response from the market,” said Esau.

During the draw, CDHIB announced the launch of another promotion called Deposit and Win which will see the grand winner walking away with an all-expensespaid for holiday for two in Cape Town.

“All clients who make additional deposit of K1 million plus in new and existing account will qualify,” said Esau.