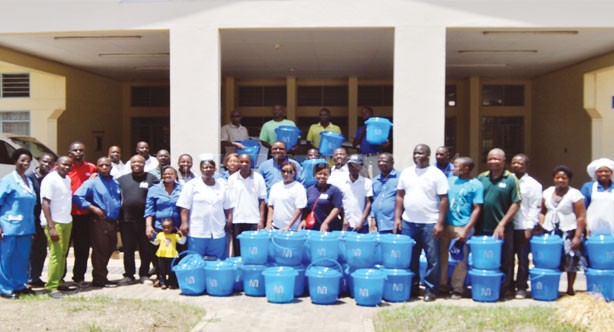 National Bank of Malawi NBM through its Lilongwe and City Centre service centres reached out to patients at Nkhotakota District Hospital last week to cheer them as part of the celebrations during this festive season where they donated various food and sanitary items.

The team, led by Lilongwe Service Centre Manager, George Nyirenda, donated buckets full of sugar, soap and food stuffs – among others – to about 200 patients, largely those in the maternity section of the hospital.

Nyirenda said the items were worth about K1.5 million and that the bank decided to take them to Nkhotakota since most companies concentrate their festive season outreaches in cities.

“We thought of coming to reach out people who are usually left out,” said Nyirenda.

He said the donation is timely as some patients struggle to recover due to food related challenges.