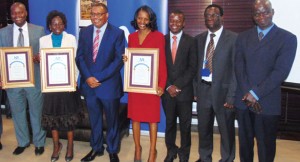 National Bank of Malawi (NBM) on Monday presented awar d s to some of it s employees who have performed outstandingly in the first six months of 2015.

The employees recognised include Jameson Maulana, a cash officer at Mangochi Service Centre who uncovered a K36 million fraud at the branch, and Jessie Chiwere –a supervisor at the forex department of NBM’s Henderson Street Service Centre after her section was found faultless following a Reserve Bank of Malawi inspection.

Management also awarded a fire fighting team from Customs Road Branch who doused a fire and prevented it from causing extensive damage at the branch.

Chiwere and Maulana went away with cheques amounting to K125,000 each while the fire team at Customs Road branch received K360,000.

In his remarks, NBM chief executive officer, George Partridge, said all the awarded employees did something beyond their core duties and job descriptions.

“They either saved or made money for the bank. They are an inspiration to everybody,” said Partridge.

He called on other employees to work hard and achieve something extraordinary that could earn them recognition during the ultimate awards for the year slated for December.