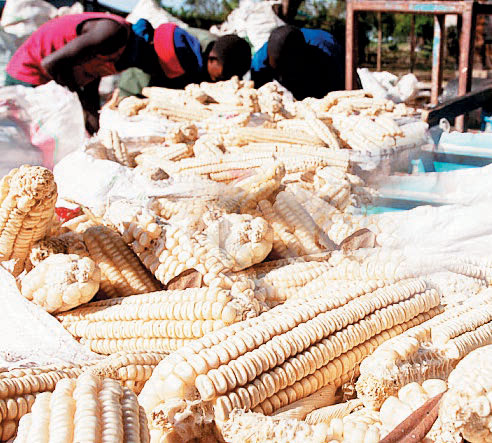 National Food Reserve Agency (NFRA) has procured 10,000 metric tonnes of maize since commencement of procurement of the commodity at the government’s set buying price of K310 per kilogramme.

In an interview, NFRA Chief Executive Officer, Nasinuku Saukira, said the Agency is buying in phases and is expected to purchase 14,000 metric tonnes by end next week.

This comes as about 1.8 million Malawians are reportedly facing hunger.

It also comes at a time prices of maize have skyrocketed reaching an all-time high of K20, 000 per 50 kilogramme bag.

Saukira said he awaits direction from the government as to whether the maize will be distributed for relief or stored for future use.

“We started buying maize on February 1, using the new set price and the response has been good from the big customers, we are buying over 500 tonnes a day,” Saukira said.

Principal Secretary in the Ministry of Agriculture, Irrigation and Water Development, Gray Nyandule Phiri said initial plan was to have maize stocks in the strategic reserve but may be disbursed to address the current hunger situation if through Department of Disaster Management Affairs (Dodma) makes a call for more maize.

“If the maize was available in good time, by now, we could have completed this exercise. This started as early as July [2019] but we could not get the maize.

“We are buying for the strategic grain reserves, if there are any other demands we will make considerations,” Phiri said.

The country requires 217,000 metric tonnes of maize to be food secure.

Commenting on the prevailing high maize prices, president of the Grain Traders Association of Malawi, Grace Mijiga Mhango, said the problem was perpetuated by traders who hoarding the grain.

“The excuse about storage cost as well as finance cost cannot justify this. Its high time traders start taking responsibility and they have to be held accountable. This is counterproductive to the battle towards food security,” Mhango said.