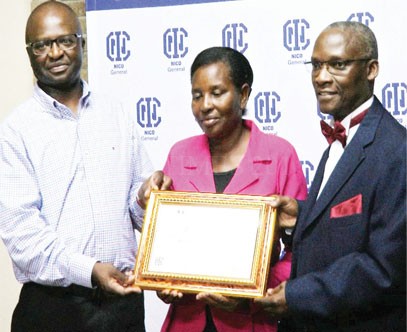 Nico General Insurance on Friday bade farewell to two of its employees who have both retired after working with the company for 33 years.

The two employees, Wilfred Gwemba and Manson Mandala, joined the company in 1981.

Speaking during a cocktail party organised for the retirees, Nico General Chief Executive Officer, Eric Chapola, thanked the two for their contribution to the growth and development of the company.

“Serving 33 years for the same company is not a joke. This is a clear testimony that we are an employer of choice,” said Chapola.

He urged other members of staff to remain committed to their job so that they can also work for the company for a long time.

He added that, though they have retired, the company will keep the two gentlemen around for some time so that they help train other newer members.

The two retirees went away with a Defy cooker each in addition to a Nico General branded wall clock and a certificate.

Speaking on behalf himself and the fellow retiree, Gwemba thanked Nico General for being a good employer over the years.

“My secret to clocking 33 years has been simple. Just listen to your bosses and do what they want. Above all, put God first,” he said.

“Of course, the 33 years were not without challenges. But when you put God first, you will get past all the challenges,” said Gwemba.