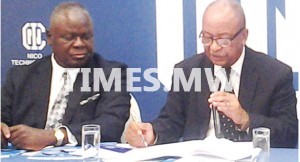 Financial services group Nico Holdings Limited once again registered a solid performance in 2014, despite the economic turbulences that rocked the country.

In its annual economic report presented during the company’s annual general meeting in Blantyre on Friday, Nico says it recorded a pretax profit of K10.4 billion, which was a slight shrink from the K11.6 billion recorded in 2013.

Nico Holdings chairperson Alaudin Osman said in his report that excluding the K2 billion exceptional profit made on the sale of investments in 2013, the profit before tax for 2014 is 11 percent higher than the K9.4 billion of 2013.

He said Nico Holdings was in 2014 preoccupied with strengthening o f its operations in Malawi, Zambia, Tanzania, Uganda and Mozambique.

Osman said the partnership with Sanlam Emerging Markets, which took strategic shareholdings in some of Nico’s companies, was also a major highlight during the year.

Sanlam acquired Nico’s 49 percent shareholding in General Insurance businesses in Malawi, Zambia, and Uganda in 2013 and 49 percent of Niko Insurance Tanzania in 2014.